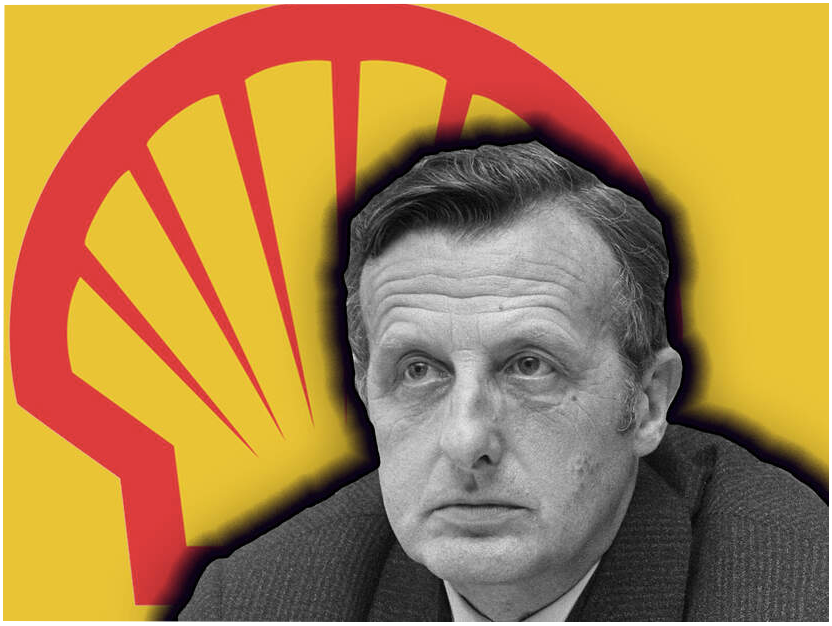 Shell and other Dutch multinationals donated over a million guilders – close to half a million Euros – to prominent Dutch climate science denier Frits Böttcher during the 1990s, documents from his personal archives reveal. Böttcher’s explicit objective: to question human responsibility for global warming.

“In the past three years I managed to coordinate the scientific opposition against the CO2-Hetze [hate campaign]”, Böttcher, who died in 2008, writes in a letter to Hubert Knoche, then secretary general of the lobby group of European oil refiners Europia. The year is 1996 and the emeritus professor of chemistry, although 80 years old, is at the height of his prominence in the climate debate.

In May of the same year he would appear before the Dutch parliamentary committee, investigating the causes and consequences of human-made climate change, to argue that the UN’s official advisor, the Intergovernmental Panel on Climate Change (IPCC), had it all wrong. In Böttcher’s view, carbon dioxide had mostly positive impacts on plants and the greenhouse effect was an unproven hypothesis. The expected rise in carbon dioxide levels in the atmosphere should not be feared, he stated on Dutch national television: “For the plant world, it’s only a small step in the right direction.”

He would repeat that message countless times in his publications, public lectures and statements to the Dutch and foreign press.

Although not a climate scientist, Böttcher’s reputation as an academic, former member of high-level public advisory boards, and “one of the founders of the Club of Rome” opened many doors. For years, he was seen in the Netherlands as a self-styled “leader of the opposition” against the Intergovernmental Panel on Climate Change (IPCC).

Böttcher attempted to unite other climate science deniers across Europe in his crusade against the IPCC, as he wrote in his letter to Knoche. “Together with two British friends [known to be Roger Bate and John Emsley] I founded the European Science and Environment Forum (ESEF). In March this year we launched our report The Global Warming Debate during an international press conference in Geneva. Our opposition against the IPCC conclusions drew much attention.”

The letter to Knoche is one of the thousands of documents in Böttcher’s personal archive uncovering his role in the climate science denial movement in the Netherlands and abroad during the 1990s. Personal notes, letters, faxes, e-mails and minutes of meetings with sponsors are stored in the provincial archives in Haarlem, where Böttcher’s legacy was moved after his death in 2008. The archive was recently discovered by Platform Authentieke Journalistiek (PAJ), a Dutch collective of investigative journalists, as part of the Shell Papers project, exposing the influence of the oil major on Dutch politics.

The bulk of the money went towards the wages of Böttcher’s two, or at times three, personal assistants employed by his foundation, the Global Institute for the Study of Natural Resources. They assisted him in making meeting minutes, collecting literature, and maintaining his personal network of sponsors and like-minded climate science deniers from the Netherlands and abroad. A small portion of the funds covered Böttcher’s travel and dinner expenses.

Besides funding, Böttcher’s papers also contain details about how his work evolved through elaborate meeting minutes – to the point of mapping seating arrangements or recording the type of wine served.

When concerns about the greenhouse effect were on the international political agenda for the first time around 1979, Böttcher became a go-to expert for Shell and others that were looking for advice about this issue.

On 13 April 1979, Böttcher wrote in a letter to the scientific council of his Global Institute for the Study of Natural Resources, a small, privately funded research institute he founded in 1976, that his institute received “many enquiries about background material” about the “carbon cycle” and is “asked for guidance or for an opinion”.

In one document, Böttcher describes Royal Dutch Shell as the “godfather” of his “CO2-project”, as he labelled his climate work during the nineties.

The personal notes on the history of this CO2-project explain that people from Shell, for which Böttcher worked as a part-time research adviser between 1953 and 1983, contacted him in 1989, shortly after he published two articles denouncing the “defamation of CO2” in the Dutch newspaper NRC. “I allowed myself to be persuaded by a number of contacts – generally from Shell circles – to take on a CO2/greenhouse effect project”, Böttcher wrote.

Huub van Engelshoven, a member of Shell’s board between 1982 and 1991, approved the first donation for the CO2 project in 1990 of 60,000 guilders (worth approximately €47,500 today) on the condition that at least three more sponsors would join. Böttcher, who throughout his long career occupied board positions in 12 different companies and who was a well respected figure among the Dutch old boys’ network of business leaders, collected pledges from three other companies (AkzoNobel, Hoogovens and the ANWB) in a matter of weeks. In the nine years that the CO2-project lasted (1990-1998), at least 24 other firms, mostly Dutch, would join the list of sponsors.

The timing of the CO2-project and the involvement of Shell and other companies is no coincidence. The Intergovernmental Panel on Climate Change (IPCC) was founded in 1988. In November 1989, the Netherlands hosted the first international climate summit in the coastal town of Noordwijk. After the summit, the call for ambitious climate policies that could affect large industries grew.

Böttcher’s participation in the emerging climate debate was useful to Dutch industry, as Shell’s Huub Van Engelshoven would tell him in a meeting in June 1994.  According to a report of the meeting from Böttcher’s archive: “Huub emphasized once again that I come across as more neutral as a scientist than people from the business sector.”

Böttcher’s documents also reveal that his relationship with his sponsors was more than financial, as his donors helped to disseminate his publications, find other sponsors and deliberated about the content of his future articles.

One of the first achievements of the CO2-project was the production of his booklet Science and Fiction of the Greenhouse Effect, published in 1992. The booklet – a fierce diatribe against climate science, the IPCC, and environmental policies – was distributed through his contacts within industry.

As Ian Christmas, chair of the International Iron and Steel Industry (IISI), wrote to Böttcher in April of 1994: “there is an appreciation of the value and quality of the contribution which the Institute is making to the debate on carbon dioxide and the greenhouse effect. Accordingly we would like to order from the Institute 100 copies of the report which we would distribute to all our Board of Directors who represent the major steel companies world-wide.”.

Lois Johnston, a press spokesperson for US oil company Texaco, did the same for several of Böttcher’s publications between 1995 and 1998, approaching her colleagues in the oil industry and her media contacts to disseminate the work, letters and reports of meetings show.

A document listing his “contacts in Washington” mentions the notorious coal-funded Climate Council and its director Donald Pearlman (a “good friend”), Robert Jastrow and Frederick Seitz of the George C. Marshall Institute, and Fred Singer of the Science and Environmental Policy Project (SEPP). Though no evidence of direct funding from these organizations to Böttcher was discovered, correspondence reveals close collaboration with the groups. For instance, Böttcher served on the Scientific Council of SEPP since 1992, and regularly discussed his activities with its director, Fred Singer.

The global coordination of like-minded organizations was one topic of discussion between them, as a telefax sent by Böttcher to John Emsley and Roger Bate in June 1997 shows. It says Böttcher and Singer “exchanged ideas about the formation and functioning of an international network based on the Heidelberg Appeal [HA]. On April 17th Fred Singer and the originator of the HA, Michel Salomon (member of ESEF), founded a Washington-based organization, Heidelberg Appeal International Inc. They intend to coordinate various national organizations, including HA-US, HA-F, HA-D, and so on. Their common goal would be the realization of the aims of the HA by educating other scientists, politicians, the media, and the public.”

Böttcher’s papers also reveal ties with the US-based George C. Marshall Institute. The institute’s 1989 publication titled Global Warming: What Does the Science Tell Us? by Frederick Seitz – which, according to Naomi Oreskes in her book Merchants of Doubt, played a crucial role in fomenting US opposition to a binding climate agreement in 1989 – was an inspiration to Böttcher and he circulated it to others in the Netherlands.

In 1993, Böttcher proposed to his main contact at Shell, former managing director Huub van Engelshoven, along with Robert Jastrow, that he set up a European sister organisation of the George C. Marshall Institute, letters and reports from meetings show.

The suggestion was rejected in 1993, however, as the George C. Marshall Institute did not want “to lend its name to a European organization over which it would not have full control”.

Instead, Bottcher set up the London-based European Science and Environment Forum (ESEF), together with the British climate science deniers John Emsley and Roger Bate.

From 1994 onwards, the ESEF would publish several books arguing against mainstream climate science and would recruit scientists sympathetic to the group’s position on climate change.

The publications would be disseminated through an ever growing network of companies and policymakers. Böttcher’s ties to mostly Dutch and German corporations including Thyssen Stahl, Bayer and Manabaft, as well as lobbying groups working on a European or global scale such as the World Coal Institute, Europia and the international Iron and Steel Institute, turned out to be particularly useful for spreading ESEF’s message.

Böttcher’s archive reveals the ESEF received corporate funding, directly and indirectly, contradicting public statements that the group “does not accept outside funding from whatever source, the only income it receives is from the sale of its publications”.

Böttcher’s letters reveal that contributions to the CO2-project from corporate sponsors were used to support his efforts to influence the climate debate, including his work for the ESEF. Minutes from ESEF meetings also show that hundreds of their publications were sold to private companies.

For instance, at a meeting in May 1996, a sales report included in the minutes shows that 1288 copies of their controversial The Global Warming Debate book were sold, worth £17,295. The buyers were mainly oil, coal, chemical and steel companies.

The sale of books appeared to be a useful way for both sponsors and the ESEF to provide cover for the mutual relationship. ESEF minutes from October 1996 state that certain companies want to “keep a distance” with the ESEF, “hence the sale of books”. A pre-order from Texaco is accompanied by the remark that it is placed “in order to make possible the publication.”

Eventually, the ESEF would be absorbed by the Foundation Heidelberg Appeal Nederland or “Stichting HAN”, a Dutch foundation founded in 1992 with which Böttcher collaborated closely. Stichting HAN was later absorbed by the “Groene Rekenkamer” [Green Accounting Office], which is still active today and collaborates with Dutch climate science denier organizations such as CLINTEL, launched in 2019.

In various letters and personal notes, Böttcher observed that worries about public opinion and environmental movements drove sponsors to distance themselves from his CO2-project. Between 1997 and 1998, contributions from Texaco and Shell are filed as contributions to research on “sustainable development”, until they finally end their financial support after 1998.

Dutch chemical company DSM, one of Böttcher’s main sponsors, gives another reason for ending the financial support to his CO2-project in a letter in 1998. The company said it was grateful for Böttcher’s work in previous years and that the decision to end its funding “should not be interpreted as a lack of appreciation for your efforts around CO2 policy”. Damningly, however, DSM explained that its support was ending “based on our impression that the impact of your lobby is dwindling”.